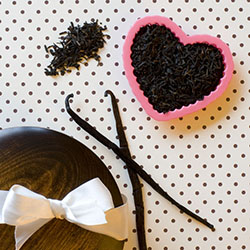 Mamma and Pappa T enjoy a good cup of Hot or Cold Tea once in awhile and thought we would take the time to share some interesting information about Loose Leaf Teas.

WHAT IS BLACK TEA?

Black tea is a type of tea that is more oxidized than oolong, green and white teas. All four types are made from leaves of the shrub (or small tree) Camellia sinensis. Black tea is generally stronger in flavor than the less oxidized teas. Two principal varieties of the species are used – the small-leaved Chinese variety plant (C. sinensis subsp. sinensis), which is known for its complex and sometimes delicate flavor, and the large-leaved Assamese plant (C. sinensis subsp. assamica), which is known for its robust flavor.

WHY IS BLACK TEA GOOD FOR YOU?

While green and white tea receive a lot of attention for their health benefits, black tea has its own unique properties. The beneficial polyphenols in green and white tea are converted into another type of polyphenol during oxidation: theaflavins and thearubigens. These black tea specific antioxidants have been linked with a reduced risk of stroke, a decrease in cardiovascular problems, and a reduced risk of diabetes.

In 2001, Boston University found in a study that both short-term as well as long-term drinking of black tea actually reverses something called endothelial vasomotor dysfunction in patients with coronary artery disease. This is a dysfunction which basically serves as a predictor for even more serious coronary events. The conclusions in the study backed up a previously held link between black tea and its propensity to lower cardiovascular problems.

A long-term study by the Netherlands National Institute of Public Health and the Environment linked regular consumption of black tea with reduced risk of stroke. Researchers looked at the health benefits of foods that are high in flavonoids. While some of the flavonoids were obtained from fruits and vegetables, seventy percent came from black tea. The study looked at 552 men over a 15 year period. Researchers concluded that the flavonoids in black tea helped reduce the production of LDL – the “bad” cholesterol that can lead to stroke and heart attacks. Furthermore, men who drank over four cups of black tea per day had a significantly lower risk of stroke than men who drank only two to three cups per day.

Another study of 3,000 adults in Saudi Arabia produced similar findings. Researchers found that regular consumption of black tea can reduce the risk of coronary heart disease by fifty percent.

Black tea contains a substance that mimics type 2 diabetes drugs Precose and Glyset. Black tea contains more of the substance, a polysaccharide compound, than either green or oolong tea, according to Haixia Chen and colleagues of Tianjin University, China. Their findings were reported in the Journal of Food and Science.

This site uses Akismet to reduce spam. Learn how your comment data is processed.